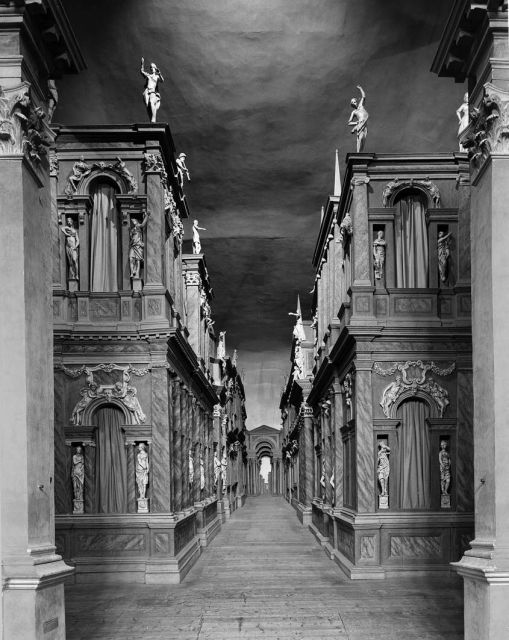 Following Palladio’s death in 1584, the Olympic Theatre was completed by Vincenzo Scamozzi, who introduced a series of rational solutions for the arrangement of the routes of access to the theatre and designed a fascinating, multiple-focus scenic background for the stage, which was used for the first time as a fixed setting on the evening of March 3rd 1585, when the theatre was inaugurated. Palladio had thought of creating decorated artificial perspective views only on the far side of the central archway and had envisaged painted panelling the side arches. Scamozzi however created the ‘Seven Streets of Thebes’, a fixed setting used for the first time as the backdrop for the play Oedipus Rex. Besides the scenery, Scamozzi also planned the lighting arrangements, involving the use of oil lamps. Commenting on Scamozzi’s artificial perspectives a spectator as the inaugural evening suggested that, “without illumination they are worthless but when illuminated, they can be fully admired.” The care taken over natural and artificial lighting remained a constant and important factor in Scamozzi’s work.