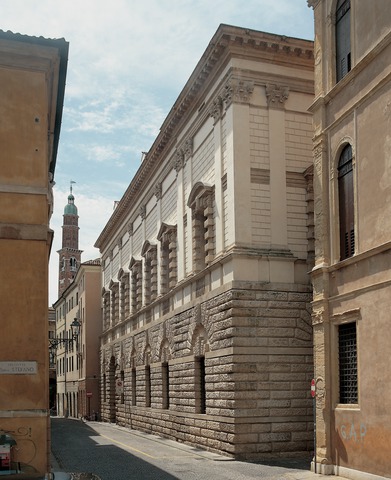 In October 1542 Marcantonio and Adriano Thiene began to remodel their Quattrocentesco family palace to a grandiose project, which would have occupied an entire city block of 54 x 62 metres and faced onto Vicenza’s principal artery (today’s Corso Palladio). The rich, powerful and sophisticated Thiene brothers belonged to that great Italian nobility which could moved with ease between Europe’s most important courts: they therefore required a domestic stage adequate for the cosmopolitan nobility of their guests who might visit them. At the same time, as exponents of a well-defined, political faction in the city’s aristocracy, they desired a princely palace to emphasise their proper role in the city itself, as the sign of their true seigniorial power.
When, in 1614, the English architect Inigo Jones visited the palace he noted down information directly garnered from Vincenzo Scamozzi and Palma il Giovane: “this project was made by Giulio Romano and executed by Palladio”. Most probably, in fact, the original conception of the Palazzo Thiene should be attributed to the mature and expert Giulio Romano (from 1573 at the Mantuan court of the Gonzagas, with whom the Thiene enjoyed the closest rapport) and the young Palladio was responsible rather for the executive design and execution of the building, a role which became ever more essential after Giulio’s death in 1546.
The elements of the palace which are attributable to Giulio and alien to Palladio’s vocabulary are clearly recognisable: the four-column atrium is substantially identical with that of the Palazzo del Te (even if Palladio indubitably modified its vaulting system); also Giulian are the windows and the ground storey façades onto the street and courtyard, while Palladio must have been defined the upper storey trabeation and capitals.
Works began on the building in 1542. In December of the same year, Giulio Romano visited Vicenza for two weeks as a consultant on the Loggias for the Basilica. Probably on this occasion he supplied the outline project for the Palazzo Thiene. But works proceeded slowly: on the external façade is inscribed the date 1556, and in the courtyard 1558. In 1552 Adriano Thiene died in France and thereafter, when Marcantonio’s son Giulio became Marchese di Scandiano, family interests gradually shifted to Ferrara. As a result only a small portion of the grandiose project was ever realised, but probably neither the Venetians nor the other Vicentine nobles would have accepted such a private kingdom in the centre of their city.