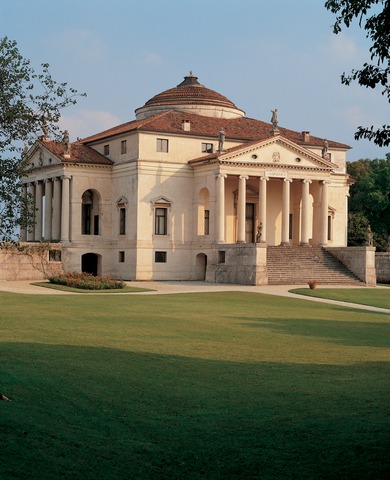 Although the Villa Rotonda is the universal icon of the Palladian villa, in reality its owner considered it an urban residence, or — more appropriately — a suburban one. Paolo Almerico in fact sold his own palace in the city in order to move just beyond its walls, and Palladio himself publishes the Rotonda amongst the palaces, not the villas, in the Quattro Libri. Otherwise the villa is isolated on the crest of a small hill and originally there were no agricultural dependencies.
The canon Paolo Almerico, for whom Palladio designed the villa in 1566, was a man of shifting fortunes, who had returned to Vicenza after a brilliant career in the Papal court. The villa was already inhabitable by 1569, but still incomplete, and in 1591, two years after Almerico’s death, it was ceded to the brothers Odorico and Marco Capra who carried it through to completion. Scamozzi, who succeeded Palladio as architect after 1580, substantially completed the project with some deviations which recent studies tend to consider very conservative.
Certainly not a villa-farm, the Villa Rotonda is rather a villa-temple, an abstraction, a mirror of a higher order and harmony. Its corners oriented to the four compass points, and it wishes to be read above all as a volume, cube and sphere, almost as if it recalled the basic solids of the Platonic universe. Certainly the sources for such a centrally planned residential building were various, from the projects of Francesco di Giorgio inspired by the Villa Hadriana or the “Study of Varro”, to Mantegna’s own house in Mantua (or the “Camera degli Sposi” in the Palazzo Ducale), to Raphael’s project for the Villa Madama. Nevertheless the Villa Rotonda remains unique in the architecture of any epoch almost as if, by building a villa which corresponded perfectly unto itself, Palladio had wished to construct an ideal model of his own architecture.
The decoration of the building is sumptuous, with works by Lorenzo Rubini and Giambattista Albanese (statues), Agostino Rubini, Ottavio Ridolfi, Bascapè, Fontana and perhaps Alessandro Vittoria (the plastic decorations of the ceilings and fireplaces), Anselmo Canera, Bernardino India, Alessandro Maganza and much later Ludovico Dorigny (pictorial decorations).