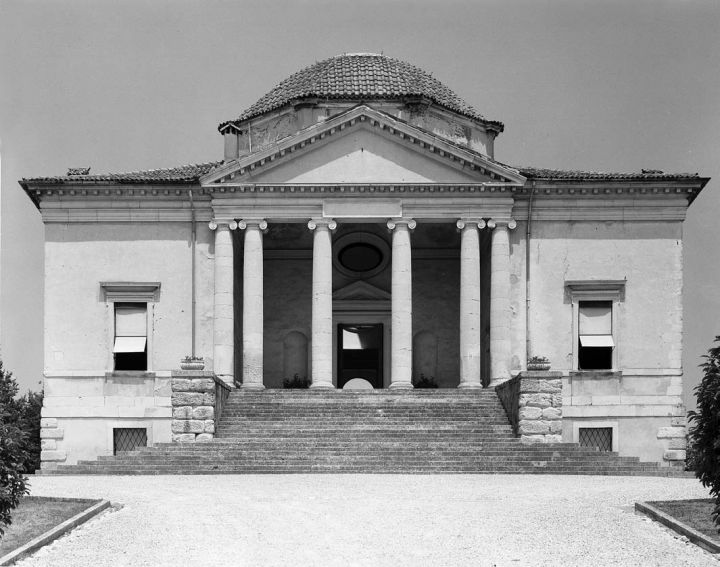 The Rocca Pisana is sited on the crown of a hill, probably on the site of an ancient fortified structure. Scamozzi began the design in 1574 when still very young.  It represented an opportunity to take up the theme of the foursquare villa, with a round central hall and cupola; in other words, an opportunity to challenge Palladio’s Villa Rotonda, then still under construction. Scamozzi’s was a radical criticism, addressing siting, orientation, internal order and compositional logic. While the corners of the cubic core of the Villa Rotonda were oriented towards the cardinal points, to favour a reading of its total volume, the Rocca was rotated 45 degrees, so the sunlight would create sharp distinctions between the four façades. Instead of the “Platonic solids” of the Rotonda (cube and semi-sphere), the Rocca could be read by level, “rigorously rational and geometric” (Barbieri), reinforced by corner masonry quoins. The central hall of the Villa Rotonda lacks direct access to the other halls; it is as if the villa were dominated by a centrifugal motif, encouraging movement toward the porticoes and the view of the landscape.  The four porticoes are the true privileged points of the building. By contrast, at the Rocca the motif is centripetal. The central hall is the effective counterpoint of the circulation systems, accessible from the other rooms and halls, the true heart of the house. From here Scamozzi, with consummate scenographic skill, orchestrated views of the surrounding landscape through vast openings. The Rotonda “splendid but uninhabitable, a house of the gods”, was thus countered by Scamozzi’s rational “house for mankind.” The difference between the solutions of Palladio and Scamozzi could not be more vivid.