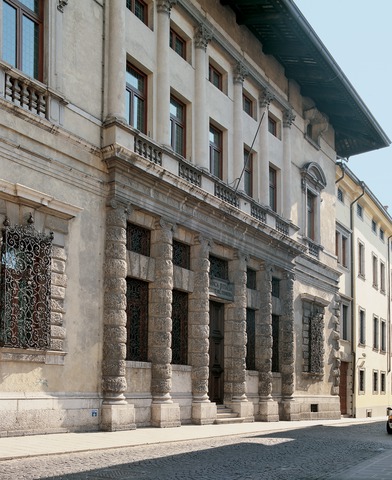 The beginning of construction on the Palazzo Antonini is traditionally said to date to 1556, contemporaneous with the construction of the Arco Bollani. The patron was Floriano Antonini, a young and ambitious member of one of the most high-profile families of Udine aristocracy. Antonini did not hesitate to resurrect erudite traditions by minting a foundation medal for the Palazzo, probably desiring to demonstrate that sophisticated taste was not the exclusive prerogative of aristocratic circles in the capital. In 1559 the palace was already partially inhabitable, but in 1563 building works were still in progress. In the following century, at least two campaigns of works heavily altered the building’s appearance, going so far as to replace all the windows, except those to the right of the loggia on the back façade, as well as the internal staircases. In 1709 Martino Fischer executed the decorative ornaments, thereby contributing to the definitive transformation of the original Palladian interiors.
In essence, all that remains of Palladio’s project are the plan (less the stairs) and the building’s basic volumes, the front and back loggias (whose pediments were never executed), and the components of the “Hall of the four columns”.
This project opens the section in the Quattro Libri dedicated to city palaces although, as was the opposite case in the Villa Pisani at Bagnolo and the Villa Cornaro at Piombino, the Palazzo Antonini was actually a rather ambivalent building: it is truly an urban palace which assumes the typology of a suburban villa. In this respect, one must bear in mind that the palace rose on the borders of the urban centre, in an open area with gardens, just like the Palazzo Chiericati or the Palazzo Civena.
The design of its façades is fascinating, particularly that facing the street, with engaged Ionic half-columns, fashioned from blocks of stone, which forecast those at the Villa Sarego at Santa Sofia, a real anomaly in Palladio’s poetry. Moreover, a thick web of openings transforms the loggia onto the street into a sort of diaphragm transparent to the light. The entire edifice seems to be strapped by continuos bands of stone, from the plinth of engaged columns to the trabeation, right up to the band corresponding to the upper frieze, where the small unframed windows of the granary open.