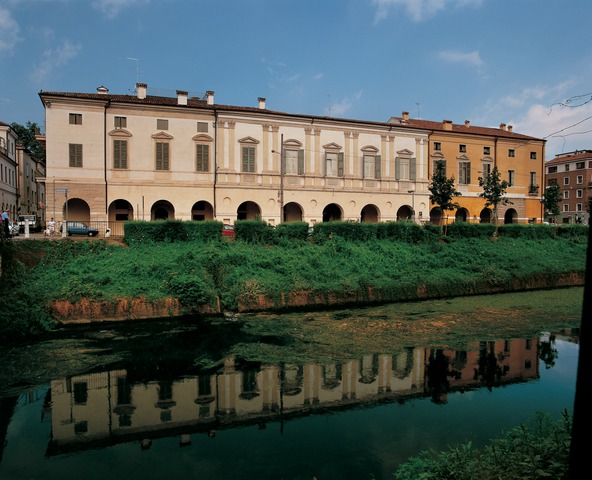 The first city palace that Palladio built in Vicenza was constructed for the brothers Giovanni Giacomo, Pier Antonio, Vincenzo and Francesco Civena. The date “1540” engraved on the foundation medal, preserved in the Museo Civico di Vicenza, fixes the laying of the foundation stone to that year. The building was probably finished twenty-four months later, six months before the start of works on the great Palazzo Thiene. The history of the palace, however, is unfortunate: heavily modified by Domenico Cerato in 1750, it was half destroyed by bombardment during World War II and thence reconstructed only for its façade to be subjected to a recent, vulgar repainting which has rendered it a shadow of its former self.
Palazzo Civena was not included in the Quattro Libri, but various autograph drawings by Palladio exist to document the several alternatives he elaborated during the design stage. Today’s distribution of internal spaces does not replicate Palladio’s definitive idea but is the fruit of Cerato’s heavy interventions, which prolonged the atrium and modified the stairs. The original plan, however, may be reconstructed thanks to a nineteenth-century survey published in 1776 by Ottavio Bertotti Scamozzi (according to whom it was obtained from the proprietors): the grouping of rooms in two nuclei placed to either side of the atrium, with a serliana providing the filter to the exterior, is very close to Palladio’s villa projects in the same years.
The very early date of the project makes Palazzo Civena precious evidence of Palladio’s youthful activity and his architectural culture before the decisive journey to Rome in 1541. As was already the case with the villa at Cricoli, this building marks a rupture with constructional praxis in Vicenza: the traditional polifora at the centre of the façade has been substituted with a regular sequence of bays, rhythmically articulated by paired pilasters. In this respect Palladio was evidently inspired by the Roman palaces of the early Cinquecento, but it is clear that this did not result from direct acquaintance: the building’s façade is devoid of any real plastic substance and seems cut from a sheet of paper. Moreover, all the elements of his architectural vocabulary derive from Venetian models, not Roman ones, above all the buildings realised by Giovanni Maria Falconetto in Padua.