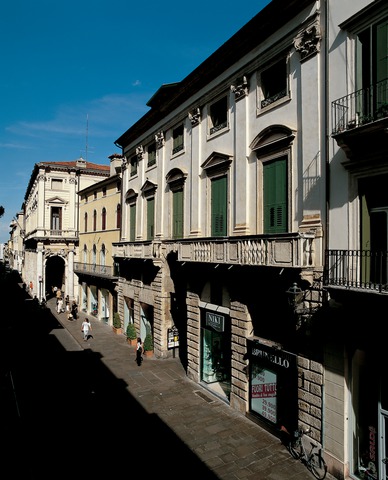 The palace we see today was created from two buildings separated by the alley known as Due Ruote, probably in 1566, following upon a request by Vincenzo Poiana to the Comune of Vicenza in 1561.
The attribution to Palladio is founded neither on documentary evidence nor on autograph drawings, but rather on the evidence of the architectural quality of the articulation of the piano nobile, with its order which embraces two whole floors, not to mention the design of various details, like the very elegant and fleshy composite capitals and the trabeation.
However, elements such as the pilasters devoid of “entasis” (that is to say the characteristic swelling which culminates at a third of the shaft’s height) conform so little with Palladio’s vocabulary in the 1560s, that one may hypothesize that the design of the left-hand portion of the palace was the product of a youthful project by Palladio, only later extended to include the neighbouring building during the 1560s, when Poiana decided to enlarge his own residence. This would also explain the differences in the configuration of the basement zone between the two halves of the building.