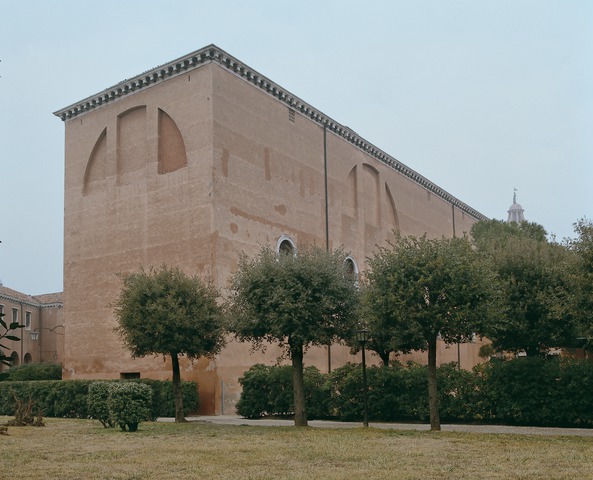 The first contact between Andrea Palladio and the very rich Benedictine Congregazione di Santa Giustina regarded the construction of a refectory for the convent of San Giorgio Maggiore, begun in July 1560 and concluded three years later. In reality, this entailed remodelling and completing a building begun a couple of decades earlier, which Palladio transformed into one of his most sumptuous and fascinating achievements: a calibrated, scenographic sequence of spaces on two levels running right the length of the refectory aula .
Broad stairs lead to the first grand portal (a philological quotation of a precise Roman model: the portal of San Salvatore at Spoleto), through which one reaches a vestibule where twin, extraordinary, red marble lavamani (wash-stands) stand on a red and white floor. A second portal — which is a Palladian reinterpretation of the first one — introduces one to the great aula. The latter is covered by a majestic barrel-vault which becomes a cross-vault at its middle to accommodate the openings of two lateral, thermal windows. The model was evidently the vaults of ancient baths which he had already explored in youthful projects like the Villa Valmarana at Vigardolo (1542) but which here he re-proposed on an unheralded scale.
The magnificence of the refectory’s architecture was originally complemented by the great canvas of the Marriage at Cana, commissioned from Paolo Veronese in 1562 and completed after just over a year’s work, set up on the back wall. Without doubt the painting was conceived in relationship to Palladio’s volume and the great thermal window above it, but it was looted in 1797 on the orders of Napoleon and transferred to the Louvre.
In any case, the extraordinary richness of the ensemble can only testify to the quality of the monks’ taste and the grandeur of life in the monastery, one of the most powerful in Italy. This did not stop the monks, however, from constraining the architect to retain the archaic Cinquecento windows — evidently remains of the first building campaign — which Palladio limited himself to framing with “all’antica” elements.