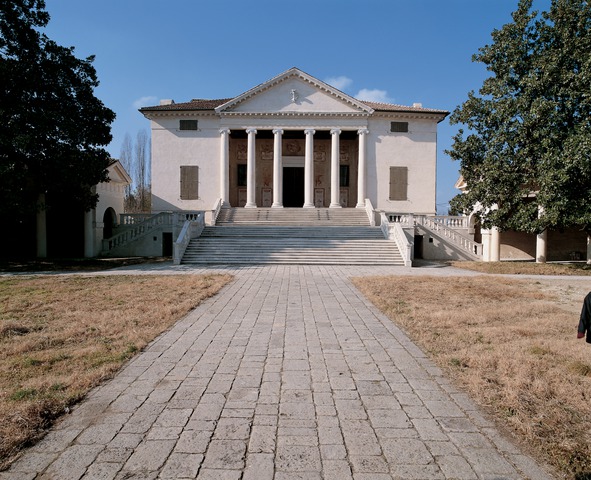 In 1554, on the southern border of the Venetian Republic’s territories, in the flat and foggy country of Polesine, Palladio designed a villa for the Venetian noble Francesco Badoer, intended to become the epicentre of the vast agricultural estate of almost five hundred fields that he had inherited six years previously. Constructed and inhabited in 1556, the villa therefore functioned for the management of the fields and was simultaneously a visible sign of the “feudal” presence, so to speak, of Badoer in the territory: it is not coincidental that the building rises on the site of an ancient medieval castle. Palladio succeeded in uniting within one effective synthesis these dual meanings, joining the majestic manor house to the two barchesse, bent into semicircles, which screen the stables and other agricultural annexes.
Probably as a result of exploiting the substructures of the medieval castle, the manor house of the villa rises on a high basement, and recalls illustrious precedents like the Villa Medici at Poggio a Caiano by Giuliano da Sangallo, and the not far distant Villa dei Vescovi at Luvigliano by Falconetto. This manoeuvre rendered necessary a scenographic staircase of several flights, the principle descending to the courtyard and the two lateral ones connecting with the gable-ends of the barchesse. Thus, the ensemble recalls the structures of an antique, terraced temple complex. The very elegant curvilinear barchesse are the only ones that were actually realised by Palladio from the many projected (for example, those for the Villa Mocenigo on the Brenta, the Villa Thiene at Cicogna or the Villa Trissino at Meledo) and their form — as Palladio himself writes — recalls arms opening to receive the visitor: the relevant antique source was very probably the exedrae of the Temple of Augustus in Rome.
On the barchesse Palladio used the Tuscan order, appropriate to their utilitarian function and for the opportunity they afforded of realising very broad intercolumniations which would not impede carriage access. Instead, the villa’s loggia displays an elegant Ionic order, to emphasise its residential, manorial status. The visual focus of the entire complex was centred precisely on the dominant axis of the great triangular pediment supported by Ionic columns, which bears the family arms, such that the villa’s flanks and rear are absolutely unarticulated and present a simply utilitarian aspect.
Moreover, the distributive structure of the manorial house reveals Palladio’s usual organisation into a vertical axis, with service rooms occupying the basement storey, the patron’s habitation on the piano nobile and a granary in the attic. All the rooms are covered by flat ceilings and on the walls Giallo Fiorentino designed complex combinations of allegorical figures, whose significance remains partially obscure.