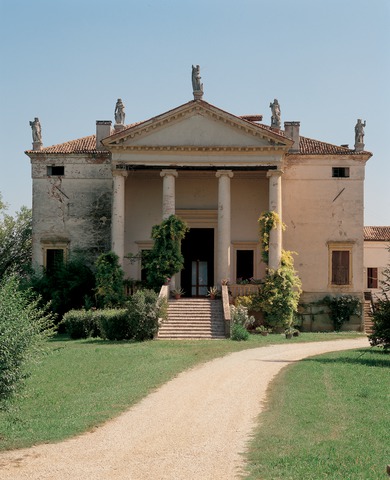 Despite the scanty attention which the critical literature has accorded it, the Villa Chiericati at Vancimuglio marks a fundamental stage in the evolution of Palladio’s architectural language. Here, for the first time, a true and proper antique temple pronaos was applied to the body of a villa, creating a motif which would become a classic solution for succeeding projects (for example, the Rotonda and the Malcontenta). The villa’s patron was Giovanni Chiericati, the brother of Girolamo, for whom Palladio was simultaneously building a palace on the “Isola di Vicenza”. In all likelihood the project for the villa was virtually contemporaneous with that for the Palazzo Chiericati, and should therefore be dated to the early 1550s, even though building works had still not begun in 1554. In 1557, a year before the death of the patron, the villa was still largely incomplete, since in 1564 it was roofed but still without floors and windows, and still not inhabited. Acquired by Ludovico Porto in 1574, the villa was completed in 1584 at the hands of Domenico Groppino, a habitual collaborator of Palladio.
Some autograph drawings and sketches preserved in London document Palladio’s original project for the villa, notably modified in the executive phases: in fact, the original, central bi-absidal salone would disappear in favour of a simple cubic space. This change of program led to the closing of the thermal window still visible in the later project. In another study sketch one should also note a first solution for a pronaos with columns on its flanks, then substituted by the present wall pierced by an arch. The latter guaranteed the rigidity of the structure and followed the antique example of the Portico di Ottavia.
However, Palladio seems to have had very little control over the villa’s execution. He surely would never have realised columns devoid of entasis, as they in fact are. Furthermore, the internal distribution of two frontal rooms obliged the location of windows near the corners of the building: a disposition against which the Quattro Libri advises because it excessively weakens the corners of the building which, in fact, reveal visible signs of settlement.