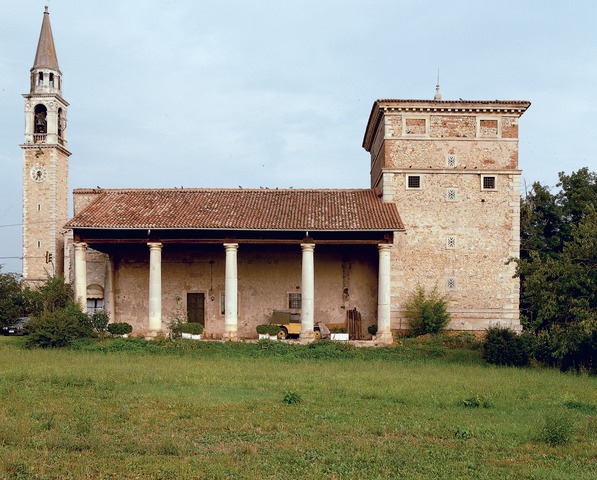 In the Quattro Libri Palladio affirms that he had begun the construction of a villa at Meledo for the brothers Ludovico and Francesco Trissino, ranking figures in the aristocracy of Vicenza and Palladio’s patrons not only at Meledo but also at their city palace in the Contra’ Riale (1558) and at a small suburban casino.
The treatise engraving restores to us a view of an imposing structure, arranged on several levels, obviously inspired by the disposition of ancient Roman acropolis complexes. It is not possible to affirm whether this project had any practical outcome. On the other hand, evident traces of the beginning of the a Palladian project do exist in the imposing stone foundations of buildings along the river and in the two barchesse with Tuscan columns of fine workmanship.
The most economic hypothesis would be that a project by Palladio existed for the Villa Trissino, although not necessarily identical to that presented in the Quattro Libri. The latter seems rather to be the development of a theoretical scheme hypothetically conceived for the real site of Meledo. The dovecote tower was furnished with fireplaces and frescoed with grotesques by Eliodoro Forbicini (a Veronese painter who had already worked in Palladio’s Palazzo Chiericati and Palazzo Thiene), an evident sign that the building’s function was not just utilitarian.