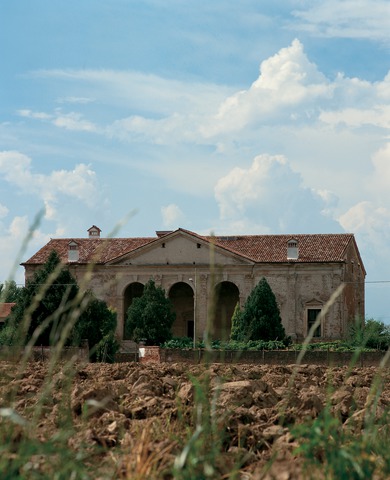 Andrea Palladio designed the Villa for Taddeo Gazzotti between 1542 and 1543. Taddeo was not of aristocratic birth, but was a cultivated man, passionate for music, with family ties (acquired by marriage) to Antenore Pagello, a celebrated member of the Vicentine nobility, and a proponent — together with Giangiorgio Trissino — of the city’s architectural renewal. Unfortunately, an ill-advised speculation on the salt duty led to Gazzotti’s ruin and in 1550 he was constrained to sell his villa, still in construction, to the Venetian patrician Girolamo Grimani, who completed it within the space of a few years.
In designing the villa, Palladio had primarily to come to terms with the necessity of absorbing a pre-existing tower-house — cited in the documents and still easily visible on the executed building’s right corner — within an up-to-date and coherent ensemble. In the end, Palladio duplicated the tower at the building’s other extremity and created two symmetrical apartments of three rooms each, connected by a barrel-vaulted loggia to the great cross-vaulted stair.
The building structure, which is long but not very deep, bound by a full-height Composite order and sporting a central loggia, strongly reflects the influence of Giulio Romano’s Palazzo del Te in Mantua and the contemporary project for the great villa of the brothers Thiene at Quinto. The emphasis on the cross-shaped hall and the presence of three-unit apartments belong to a design language which will become gradually ever more refined.