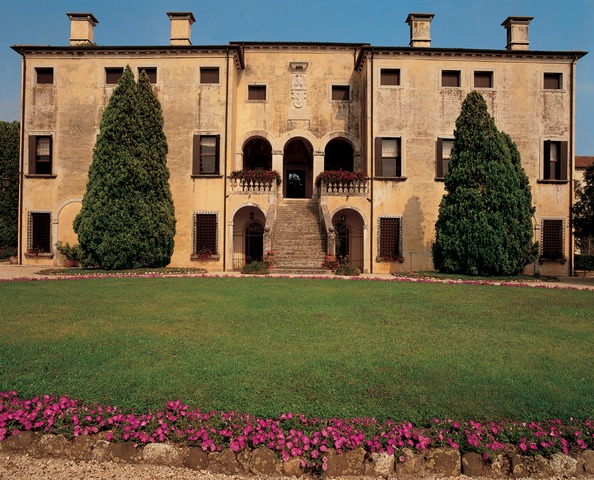 Palladio’s construction of the villa at Lonedo for the brothers Girolamo, Pietro and Marcantonio Godi began in 1537 and concluded in 1542. In all probability this was not an autonomous commission, but rather one obtained through the workshop of Gerolamo Pittoni and Giacomo da Porlezza, where the young Andrea enjoyed the position of architectural specialist. In reality, the work of restructuring the family estate had already begun in 1533, when a Doric barchessa was built in the left courtyard at the behest of Enrico Antonio Godi.
This is Andrea’s first certain work (he declares his authorship in the Quattro Libri) and marks the first step in his attempt to construct a new residential typology for the countryside. Here is first evident Palladio’s desire to interweave themes from local building tradition with those newly and gradually discovered thanks to Trissino.
The outcome is a severe building from which all the precious decorations typical of the Quattrocento tradition have been banned. Clearly symmetrical, the building is arranged around precisely defined volumes, an arrangement obtained by recessing the central part of the façade which becomes a loggia with three open arches. The same strong symmetry characterises the building’s plan, organised around the long central axis from loggia to salone, hierarchically flanked by two apartments of four rooms each.
From the end of the 1540s decorative campaigns began on the interiors, initially under Gualtiero Padovano, who frescoed the loggia and the right wing of the building, and later on (the early 1560s) under both Battista Zelotti, who was active in the salone and in the rooms of the left wing, and Battista del Moro, who decorated the last room before the loggia. Contemporaneously with this decorative campaign, Palladio returned to work on the building, modifying the back opening of the salone and designing the back garden as a hemicycle and executing the splendid well parapet.