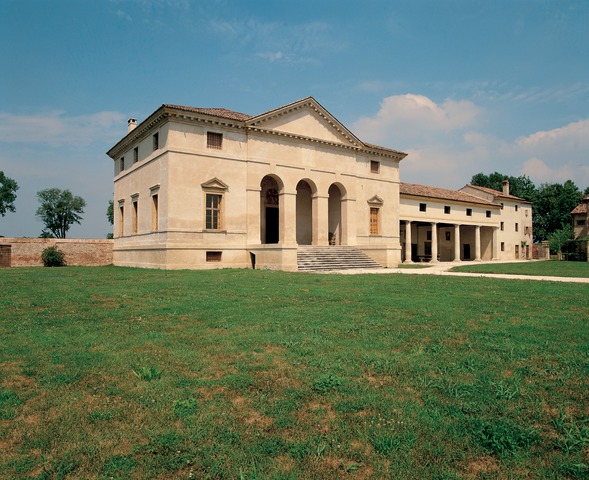 At the end of the 1540s Andrea Palladio was called upon by Biagio Saraceno to redesign an existing agricultural farm at Finale di Agugliaro, long the property of his family. Possibly, Palladio’s project originally anticipated the overall remodelling of the complex: in the Quattro Libri Palladio shows the building clamped between two great, right-angled barchesse. However, no such global restructuring was ever effected and Palladio’s intervention was confined to the manorial block: on the right side of the farm-yard the buildings are still today Quattrocento, while the barchessa was constructed at the beginning of the nineteenth century.
Whatever the case, the villa block is among the most felicitous of Palladio’s creations from the 1540s. The building displays an extraordinary, almost ascetic, simplicity and is a pure volume realised in brick and render from which every decorative element has been banned. The sparing use of carved stone is limited to the most significant architectural elements (like the windows and portals) and to the structural parts. It is only the design itself which infuses the building with magnificence, despite its reduced dimensions, as it derives its proper elements from the ancient Roman temple: the piano nobile is elevated from the earth and sits on a podium (which quarters the cellars); the façade loggia is crowned by a triangular pediment. Small windows light the attic where the grain was normally stored.
Even in plan the villa is of disarming simplicity: two minor spaces designed to accommodate the stairs result in the “T”-shape of the salone, to whose sides are set twin coupled rooms interlinked by proportional consonances.
The outset of works may be dated to the time period falling between the two cost estimates: in the first (dated 1546) the pre-existing manorial block is still mentioned, but in the second (of 1555) the new Palladian villa is described. Possibly, the construction itself dates to 1548, the year in which Biagio Saraceno acquired an important political post in the city. Whatever the case, only thirty years later Pietro Saraceno, Biagio’s son, had the internal stuccoes executed as well as the decorative schemes (perhaps by Brusasorzi).