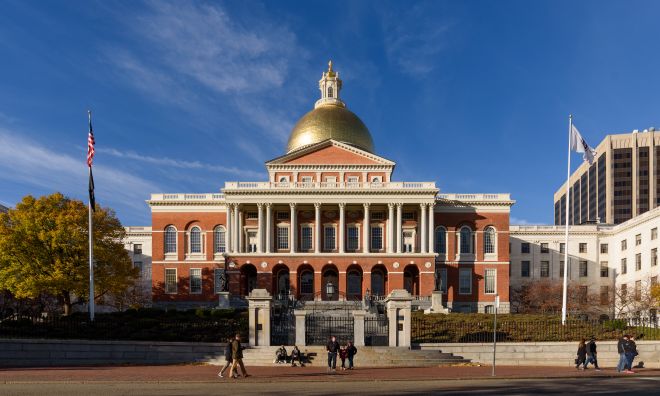 Charles Bulfinch’s Massachusetts State House (1797) reveals its Palladio origins in a Corinthian order above an arcade with a pediment dome.

The great Renaissance architect Andrea Palladio (1508-1580) rethought the building types of his time. His built works and his Four Books of Architecture (1570), later translated into other languages, provided models for public buildings and country houses in Europe, Russia, and the United States.

Thomas Jefferson, statesman and brilliant amateur architect, called Palladio’s book his “Bible,” and used it in designing his own house, Monticello, and the University of Virginia, a prototype for the American university campus.

Palladio is one of the four great architect-writers – Vitruvius, Alberti and Le Corbusier are the others – who in their books redefined the basic principles of architecture. Palladio writes that architecture should contribute to the well-being of mankind. His architecture is not only beautiful and functional but has a moral basis.

Palladio did not build for a monarch. He built for a republic and never worked to please an autocrat. His facade schemes, or ideas about latrines, have lost some of their relevance; his moral purpose, in times of climate change, pollution and global social inequality, has not.

Palladio not only merits study and attention to understand his architecture and his contribution within the context of his own time, but also for the relevance of his example today.

Why support the CISA Andrea Palladio

Since it was founded in 1958, the CISA Andrea Palladio has been the leading and most active research center worldwide for the study and preservation of Palladio’s works. It promotes research, stages exhibitions, publishes books, and organizes courses and seminars not only on historic architecture but also modern architecture – provided it is of the highest standard.

Why the American connection

On 6 December 2010 the U.S. Congress officially recognized Palladio as the “father” of American architecture. Although located in Italy, the CISA Andrea Palladio’s founders and the most active members of its Advisory Committee have included some great North American scholars: past members, such as Rudolf Wittkower, James Ackerman, Juergen Schulz, William J. Mitchell, andcurrent members Barry Bergdoll, Cammy Brothers, Joseph Connors and Douglas Lewis as well as non-American scholars living in the U.S., such as Jean-Louis Cohen and Gülru Necipoglu.

The Friends of Palladio

Based in the U.S., the Friends of Palladio works to broaden the recognition and appreciation of Palladio to a wider audience of American art lovers. Newly established in 2020, we are actively raising funds to:

1. Provide needs-based scholarships for architecture students so they can travel and study with the Center for International Studies of Architecture (CISA Andrea Palladio) in Vicenza, Italy,
2. Promote lectures and exhibits in the U.S., and
3. Support the extension of the scholarly and archival work of the CISA Andrea Palladio.