a museum-workshop: this new kind of museum features not only works of art but also the experts who describe them.

a museum in movement: having installed the hardware (a system of dynamic lighting for the spaces, video projection systems, showcases, etc), each year the software will change, i.e. the contents, according to the state of progress in studies and research.

a marvellous building: one of Palladio's finest palaces and the only one that he saw completed both as regards the architecture and decorations (causing the ruin of the patron, Montano Barbarano).

an intellectual challenge: to take specialist knowledge out of the ivory tower and communicate it to a wider public in the museum and on the web.

a far from impossible mission: recounting architecture to non-architects, not as a history of buildings but of the people who designed, built and communicated them; and showcasing architectural drawings, the tools that body forth ideas, alongside models, photographs and videos.

the beginning of a journey: to explore Palladio's buildings in Vicenza (associated with the Palladio Museum thanks to the combined ticket "Vicenza città bellissima") and his villas in the Veneto countryside.

a crossroads: a place where institutions and scholars from various parts of the world work together and present joint projects.

Palladio Museum are two words that don’t require translating on the Internet, but whose identity is underpinned by ancient Greek and Latin. Indeed the museum logo still has a memory of the diphthong from the ancient spelling musaeum.

Through the Palladio Museum the experts in the Palladio Centre illustrate their research and studies to a wider public as their work progresses, usually but not always focused on Andrea Palladio. Groups of experts work on research projects that become the themes in the museum rooms; each will usually last a year, according to a three-year programme.

This is no mausoleum for a dead hero. It is a place in which thinking about architecture is fostered, far from the more cynical commercial logic of the profession, which consumes rather than produces knowledge. The Palladio Museum works on Palladio, without “modernising” him and even less without suggesting him as a formal model for today. It explores the past using the tools of accurate historical reconstruction with special care being taken over context, which is indispensable in trying to understand a world that is distant and faded but also close and very practical, every time that we walk among palaces, pillars and churches built centuries ago. The Palladio Museum’s mission is to explore the origins of themes and concepts also found in the architecture of today by describing and discussing them with a view to creating a cultural platform for the architecture of tomorrow.

So far the research projects have concerned communication, technology, the relationship between economy and landscape, and the design of complex organisms. These are key topics for Palladio and they inform his vision in the Quattro Libri (Four Books) and in his urban projects, country villas and Venetian churches; these themes also feature, however, on the contemporary agenda.

The curatorial project and the museum design
The concept of the Palladio Museum as a research workshop open to the public was developed by experimenting new curatorial methods. The experts involved were the architect Alessandro Scandurra, also responsible for the graphic design and exhibition layout, Howard Burns and Guido Beltramini, chairman of the scientific committee and director of the Palladio Centre (CISA), respectively. The aim of the curatorial project was to work on ways of communicating complex research ideas to a wider public. The museum exhibition design by Alessandro Scandurra and Scandurrastudio organised and structured the contents by showcasing them through transience (the art-science of history is not static) with a flexible backstage. This is also based on a dynamic classification and archiving of experiences, the use of social media and of captions “annotating” all the material in the museum, from the drawings and models to the building itself.

The Palazzo
The Palladio Museum is housed in one of Palladio’s autograph works, the Palazzo Barbarano. Indeed it is the only palace that he actually saw completed and in which he was able to exercise full control over the construction and decorations. The palace itself is the first work on show in the Palladio Museum. All the significant parts of the building can be visited thanks to a “stage design” approach to showing the building. Thus for the first time, visitors can go out from the rear entrance to admire the powerful mediaeval wall of the original Barbarano residence that Palladio had to modify. More in general, visitors can see the palace through fresh eyes thanks to a series of “annotations” displayed at key points in the building. 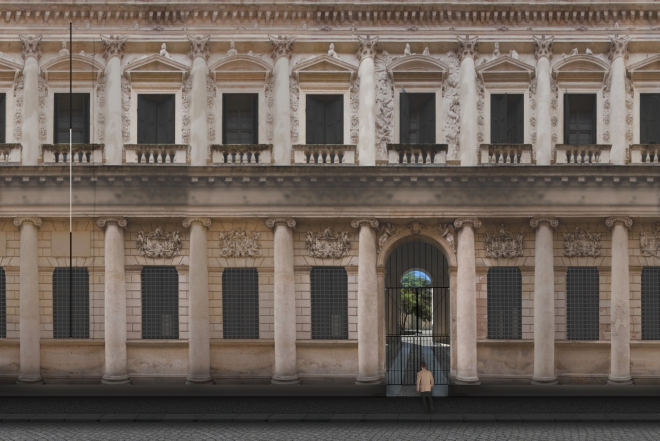 The story/stories
In the Museum’s first year of life, the exhibition itinerary goes through five rooms. It begins in the Book Room and with a parallel story – the incredible publishing success of Palladio's Four Books – and the signature building of Palladian architecture, the Villa La Rotonda, which has been copied on three continents. Next is the Stone Room, dedicated to the technologies that Palladio developed for building in stone, but also in other materials. The Silk Room, on the other hand, is dedicated to Vicenza and its production and international trading of silk, which created the cosmopolitan outlook required for Vicentines to understand Palladio's revolutionary architecture and to provide the resources to construct it. At the centre of the room is a showcase with live silkworms, feeding on the leaves from a specially planted mulberry tree in the courtyard. The Grain and Glory Room is dedicated to the great villas and the story of land reclamation which transformed the 16th-century Veneto. The glory refers to the aspirations of Palladio's patrons, reflected in the decorations dedicated to the feats of Scipio and Hannibal. The itinerary ends in the Venice Room and features the church of the Redentore, a perfect building in which every element is in the golden ratio with the other elements and the whole. The story in the rooms is retold by the original Palladian drawings, models and videos.

Original Palladian drawings on show
In the Palladio Museum there is a permanent display of original sheets with Palladio’s drawings – albeit rotated for conservation reasons. After being kept in London for almost 400 years, the drawings are gradually returning to Italy for study purposes and to be shown, thanks to an agreement with the Royal Institute of British Architects; some of the drawings are also conserved in the collections of the Vicenza Civic Museums. Each of the five drawings selected annually is an aid to exploring the themes in the five rooms. 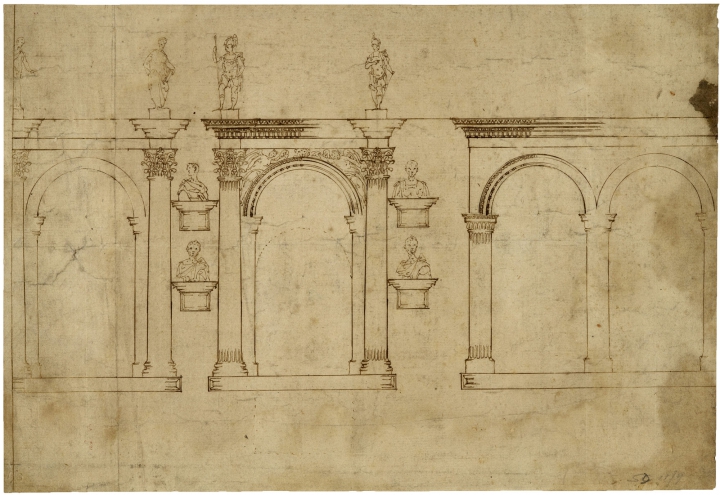 Expert views and art videos
To attract the interest of the broader public to the specific features of architecture, the Museum makes use of physical and digital models, photographs, videos and images projected on the walls of the rooms. Filippo Romano was specially commissioned to made film reports on Palladio’s buildings in the Veneto today. The result is a contemporary, non-rhetorical vision that does not overlook how people live around the buildings. Similarly Happycentro has made a video entitled A Tale of a City humorously describing how 16th-century Vicenza became “Palladian”, while Scandurrastudio’s video entitled Slot Villa is a kind one-arm bandit for Palladio fans. 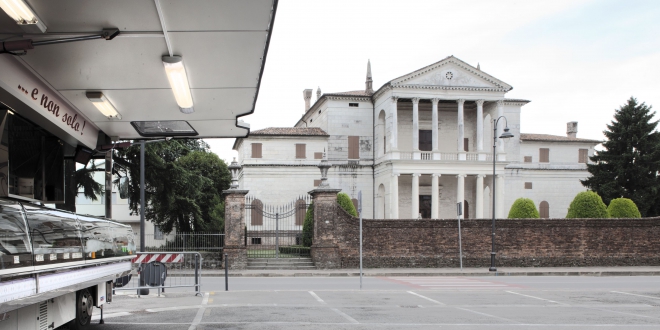 Presences
The contents and themes of each room are described in the first person by some leading Palladio experts. Their images appear projected on the walls of the palace like genies from some Aladdin's lamp. The experts are James Ackerman, Franco Barbieri, Donata Battilotti, Guido Beltramini, Howard Burns, Edoardo Demo, Antonio Foscari, Deborah Howard, Gülru Necipoglu, Damiana Paternò, Mario Piana and Vitale Zanchettin. 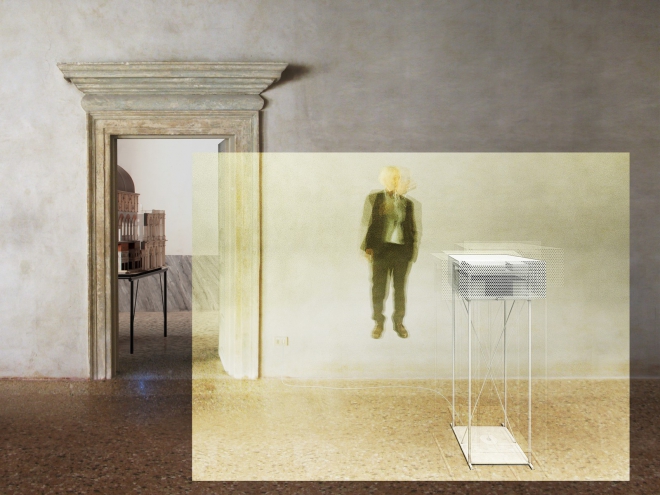 The Palladio Library
The principal information resource in the Palladio Museum is the Palladio Library, a database that brings together and links up all the material accumulated in years of research by the Palladio Centre. Indispensable for knowledge about Palladio’s works and ensuring they are fully appreciated, this includes his drawings, the largest photo library on his architecture worldwide, surveys conducted over fifty years in campaigns to measure his buildings, his books, and a series of multimedia and virtual models organised in a geodatabase. This huge store of information can be accessed from several areas in the Palladio Museum and is the outcome of a specific research project, coordinated by Guido Beltramini and Marco Gaiani, and made possible thanks to the contribution of Arcus spa.

Acknowledgments
The Palladio Museum was made possible thanks to the Regione del Veneto, Fundazione Cariverona, Arcus spa and Dainese.